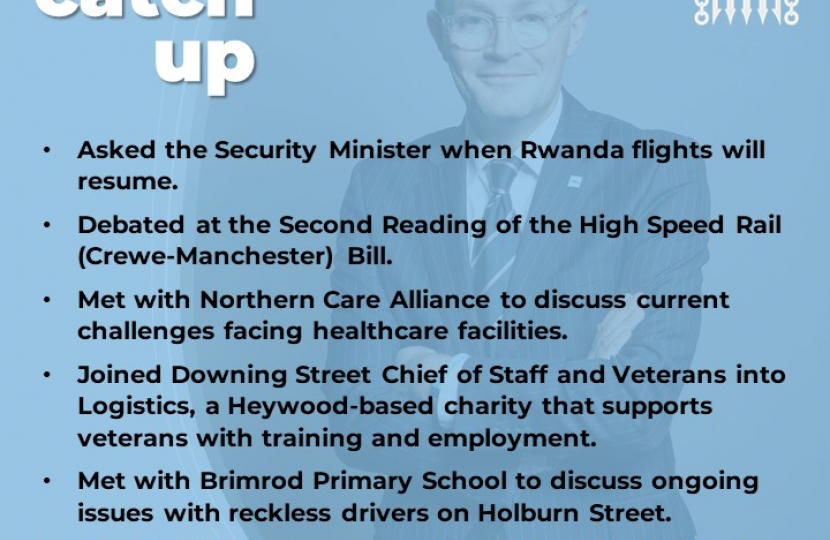 A slightly different week for this update.

I started the week in London on Monday with a service to mark the start of Armed Forces Week. As many of you know, the forces have a special place in my heart so it was especially nice to join serving personnel and other MPs to mark the occasion. The children's choir was absolutely fantastic.

It was a busy day and I was in the chamber for Home Office Questions where I asked about getting the Rwanda flights going as soon as possible. A lot of you have written to me voicing your frustration and disappointment that the ECtHR blocked the first deportations. I'm confident that the Home Office is work to address this as soon as possible. Later in the day I participated in the debate on the Crewe-Manchester section of HS2 - I'm supportive of getting HS2 to Manchester because of the massive potential for investment in our area and the new jobs that will come with it. That said I did ask the Minister to put details of the business cases for the link into the House of Commons Library because I think it's important that people can see where the money is going.

On Tuesday I had meetings in the morning and headed back to Manchester in the evening, seeing first hand the damage and disruption caused by the selfish rail strikes. These strikes were totally unneeded, the RMT refused to negotiate with "A Tory Government" and has plunged thousands into chaos at a time when people really can't afford to miss a day of work.

On Wednesday it was my very great pleasure to join Veterans Into Logistics at the AJ Bell Stadium to welcome Downing Street Chief of Staff Steve Barclay who has spent the week seeing the Government's investment in the Armed Forces Covenant and Veterans' Charities - a perfect way to mark Armed Forces Week.

Later in the Week I took advantage of being back home during the week to hold one on one meetings with constituents and to catch up on meetings. It was a special treat to meet the Student Council at Brimrod Primary with local Councillors - it's clear the future is in safe hands if our young people are already so engaged!

I'm heading back down to London for another busy week, but I've really enjoyed being able to meet with people one on one and talk about important local issues, so thank you to everyone who made the time.