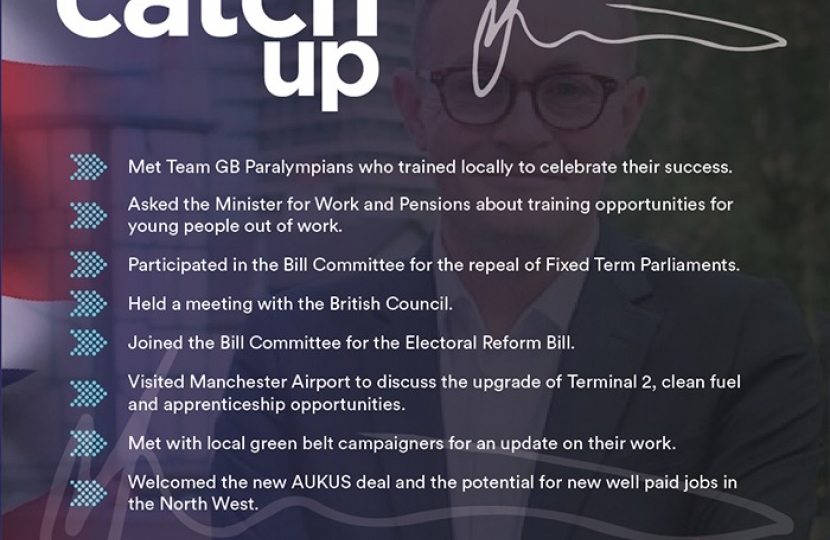 Strangely enough, since the pandemic hit when it did I and most of my colleagues in the 2019 intake of MPs haven't had a lot of experience of Parliament working under normal circumstances. As such the first week back was a kind of "boot camp" for newbie MPs where we were brought up to speed on the way things normally work. It was a pretty intense few days, but I was glad of the experience and I actual managed to get quite a bit of speaking time in, including two questions to the Prime Minister; one on supporting for Afghanistan veterans and another asking for reform of social care.

On to this week I started off with one of the nicer bits of the job - welcoming our Paralympians home from Japan at a Parliamentary reception. Most of the Team GB cyclists trained in Greater Manchester and quite a few are local so it was wonderful to hear their story and to congratulate them on the amazing job the did representing our nation.

Later on in the week it was back to "bobbing" in the chamber where I was able to get a question in to the DWP, asking them to make sure that they work with the Department for Education to make sure that jobs programmes link up with training and qualifications.

Mid week I met with the British Council to discuss their work boosting Britain's 'soft power' by promoting the UKs cultural, educational and charitable presence.

Also this week I was asked to join the Bill Committee for the Electoral Reform Bill. The Bill is designed to tackle elections fraud and reform the electoral commission - it's a good piece of work which will ensure that future elections at all levels are protected from interference and cheating. The Committee will run for several weeks, taking evidence from experts and scrutinising the legislation to make sure it does what it's intended to do.

Back in the Constituency this weekend I joined other Greater Manchester MPs for a visit to Manchester Airport for the redevelopment of Terminal 2. As well as creating a modern gateway for our region, it will create lots of good paying jobs in the area. I was pleased to hear that the Airport is working with local colleges to make sure these come to people in the region.

Also this weekend I've been focusing on the green belt as the deadline for the Mayor's "Places for Everyone" consultation approaches. As well as meeting with local green belt groups, I've been out on the doorstep talking to people in affected areas.

Next Saturday I'll be on Bamford Green helping people who want to make a submission from 10am - please come and say hello.

As always, stay safe and see you next week.