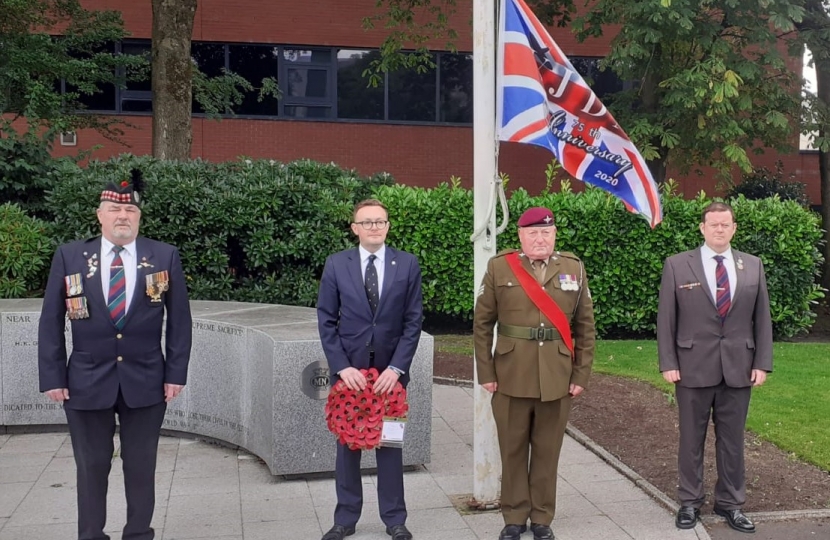 This morning, Chris Clarkson, MP of Heywood and Middleton joined Heywood Township Officers and local Veterans at a small and socially distanced gathering to commemorate the 75th anniversary of Victory over Japan (VJ) Day.

At 12 o’clock a small group gathered to lay wreathes and observe a two-minute science.  Prayers of remembrance were offered, and flags presented by members of the Heywood Veterans Association at the small but non-the-less moving ceremony.

The commemorations centred around a new installation outside the Phoenix and Civic Centres in Heywood, which have been the inspiration of Local Independent Councillor Alan McCarty with support and funding from the Heywood Township.

The installation includes a collection striking benches which have been carefully designed by Cllr. McCarthy and Martin Orson from the Heywood Veterans Association, to reflect Heywood’s connections to the historical events.

Speaking at the event Chris said: “Today’s event was both subtle and moving, a dignified remembrance both for those who made the supreme sacrifice and those who returned home having served in one of the wars most brutal conflicts with trauma that many would never speak of again.”

“It is right that Heywood acknowledges the connections that it has to these events and those who served, and that we always remember.  This new installation is a fitting reminder of those brave people and what they did for all of us.  I am glad that we have added this poignant addition to our town, which is very much in keeping with other local features.  Cllr. McCarthy and Mr. Orson, and all those involved in this project, have done an excellent job and the feedback that I have had from local people have been extremely positive.  I am aware that work is due to start on a further project to enhance the civic concourse lead by Heywood’s other Independent Councillor Jacqui Beswick and I look forward to seeing its completion.”

Speaking after the service Mr. Orson said: “As the Heywood Veterans Association we feel it is of the upmost importance to represent and show our appreciation for all of those who lost their lives in both the Second World War and Operation Banner and in these unprecedented times it is important to show that we remember them and show our community spirit is as strong as ever.”