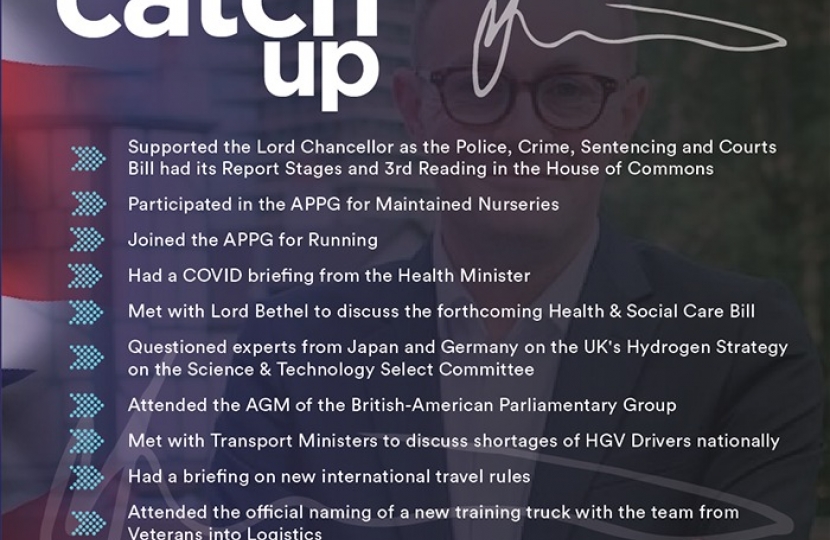 A big week in Westminster this week as the PCSC returned to the house for its Report Stages and 3rd reading – because of the size of the Bill and the number of amendments pressed, we didn’t finish debating it until 10pm, which is the first time in a while that the House has sat that late and a (for me) an encouraging sign that we’re starting to get back to normal.

On Tuesday, I had took part in the APPG on Maintained Nurseries – we’re lucky enough to have Sunny Brow Nursery in Middleton and I attended the meeting at the request of Head Janet Cook who wanted to me to understand the challenges to Early Years following the pandemic. Education is something I’m very passionate about and I was grateful for the update.

Later on I joined the APPG for running – like a lot of people I’ve padded out a bit during lockdown, so I decided it was time to break out the trainers and get myself back into shape!

On Wednesday I started the morning with a briefing on the Health and Social Care Bill which is coming back to the house shortly, before going onto the Science and Technology Select Committee where we were interviewing experts on hydrogen power from Japan and Germany.

On Thursday I took part in the AGM of the British-American Parliamentary Group which fosters relations between Parliament and Congress. The USA is arguably our most important ally and I was keen to learn more about what’s going on across the pond.

Later on I attended a meeting with Transport Minister Baroness Vere to discuss the serious shortage of HGV drivers. Locally the logistics sector is very important to the economy and I’ve been approached by a number of businesses and charities locally with their concerns about getting more people qualified for haulage driving. It was a productive session and I was able to make some suggestions based on the conversations I’d had with businesses across Heywood and Middleton.

On Friday morning I travelled back up and caught up with correspondence and casework.

This weekend I had the special privilege of joining Veterans into Logistics as the christened their new Class 1 Lorry, which will be named after Lee Rigby. The armed forces are an important part of our community and I thought it was a fitting tribute to a good man who was taken away far too soon by senseless evil.

Tonight England play Italy in the Euro Finals and so I’ll be out cheering them on, I hope you will be too: It’s coming home!