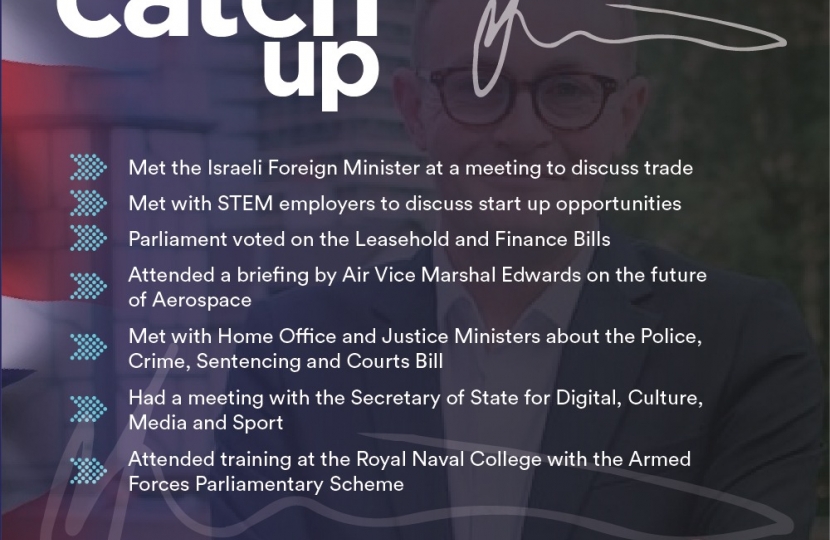 With two weeks to go before Parliament rises for Christmas recess things are as busy as ever.

This week I've managed to fit in some long standing appointments and meetings which have been hampered by the pandemic.

On Monday I joined delegates from business and politics for a lunch with the Israeli Foreign Minister - the UK and Israel are two of the world's leading science super powers and I was pleased to hear a new agreement on research and information sharing has been reached. The STEM sector is particularly important to our local economy and I wanted to bang the drum for Heywood and Middleton.

To that end, I also went to a meeting on Tuesday with a number of STEM employers in Parliament and has some promising discussions.

Also this week I joined Home Office and Justice Ministers for a discussion about the Police, Crime, Courts and Sentencing Bill before it returns to the House of Commons for votes on House of Lords amendments - I want to see the Bill passed with the toughest possible penalties to deter crime and with sensible routes to reduce reoffending.

Later in the week I was privileged to join Air Vice Marshal Edwards of the RAF for a briefing dinner where he updated us on the future of Aerospace and Air Power.

On Thursday I headed down to Britannia Royal Naval College in Dartmouth as part of the Armed Forces Parliamentary Scheme. It was a hugely rewarding experience and gave me the opportunity to ask if the RN would encourage closer links between the crew of HMS Middleton and the town for which it's named.

This weekend I was back in the Constituency catching up on work and breaking out the Christmas jumper collection for visits to various Christmas activities across the area.

With a busy couple of weeks ahead, Team Clarkson are still working hard for you and we're here to help.

They say a week is a long time in politics. This one has been very long indeed!

The news was understandably dominated by the defection of Bury South MP Christian Wakeford to the Labour Party.