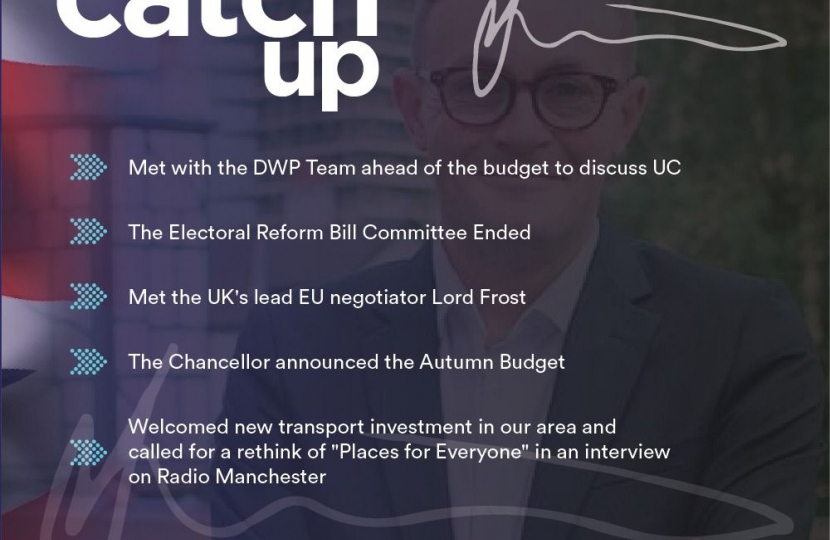 A busy week and a bit of a strange one –

The main event was of course the Chancellor’s Autumn Budget which set out our plans for recovery from COVID as well as measures to ensure both individuals and businesses are taken care of.

I was particularly pleased to see the taper rate on Universal Credit adjusted to 55%. That means that working families will keep between £1,000 and £1,800 more money a year – a lot of people wrote to me with their concerns about the £20 uplift and whilst I agreed with the decision to remove this temporary measure, I recognise that the taper rate as it was could act as a disincentive to work. People shouldn’t be penalised for doing the right thing.

I met with the Secretary of State for Work and Pensions earlier in the week to set out my thoughts and I was pleased to say that I was heard.

The other big controversy of the week was the Environment Bill.

A lot of misinformation and out-right lies have been told about Amendment 45.

As residents know, I care passionately about the local environment. As part of that, I am strongly opposed to storm overflows containing untreated sewerage discharging into rivers. It is disgusting and environmentally damaging and needs to end.

The Government has inserted a range of amendments to the Environment Bill to address the concerns MPs have raised about storm overflows. I voted in support of Amendment (a) to Lords Amendment 45, which passed by a margin of 265 votes for to 202 votes against.

Section 141A, tabled by the Duke of Wellington in the House of Lords, was removed from Amendment 45. Section 141A sought to place a new duty on sewerage undertakers in England and Wales to demonstrate progressive reductions in the harm caused by discharges of untreated sewage.

This all sounds admirable, and indeed is something I support in principle. But the trouble is that the Duke’s amendment came with no plan as to how this can be delivered and no impact assessment whatsoever.

Some might argue that a plan is not essential, that one can be formulated afterwards. I would be sympathetic to this point of view if we were talking about a simple, inexpensive endeavour. But in eliminating storm overflows, we are talking about transforming a system which has operated since the Victorian era.

The practical problem is that in many properties across the UK there is just one system of pipes that takes both rainwater and sewerage from homes, rather than separate systems for rainwater and for sewerage. When there are storms, so much rainwater enters the sewerage system that it cannot be contained and needs to flow somewhere. If we didn’t have storm overflows into the rivers, then there would be flooding with raw sewerage, which can be extremely harrowing for households. Preventing the discharge of untreated sewerage during storms is a major change to infrastructure in almost every town and village in the country. Some mitigations such as storm tanks can reduce discharges but don’t usually eliminate them.

The preliminary cost of this national infrastructure change is estimated to be anywhere between £150 billion and £650 billion. To put those figures in perspective, £150 billion is more than the entire schools, policing and defence budgets put together, and £650 billion is nearly twice what has been spent combatting the Coronavirus pandemic. It would bankrupt most water companies unless consumers or taxpayers contribute. The cost works out at between about £5,000 and £20,000 per household.

The Government’s view (with which I agree) was that it would have been irresponsible to have inserted this section in the Bill given that it was not backed by a detailed plan and thorough impact assessment. It would have been the equivalent of signing a blank check on behalf of billpayers.

Stopping sewerage discharge into rivers is so complex that in previous decades, no government (Conservative, Labour or coalition) has tackled it. But now we are.

I was pleased to support the other amendments to the Environment Bill relating to storm overflows (including the rest of Amendment 45).

This is absolutely essential, as it will provide Parliament and the public with up-front, clear and comprehensive information on the cost and impact of eliminating storm overflows. Between the Government plan on storm overflows and the new elimination report, we will fully understand precisely how we can best tackle storm overflows.

So while setting out lofty aspirations is all well and good, what we really need to do is the long, detailed, practical work required to understand how we can deliver on these ambitions. It is not glamorous or headline-grabbing. But it is the effective action we need to deliver for local residents.

This is not all the Environment Bill only legislates for. I supported amendments to the Bill which take firm and immediate action to tackle storm overflows in the short-term, including:

•             A new duty on water companies and the Environment Agency to publish data on storm overflow operation on an annual basis.

•             A new duty on water companies to publish near real time information (within 1 hour) of the commencement of an overflow, its location and when it ceases.

•             A new duty on water companies to continuously monitor the water quality upstream and downstream of a storm overflow and of sewage disposal works.

•             A new duty on water companies to produce comprehensive statutory Drainage and Sewerage Management Plans setting out how the company will manage and develop its networks, and how storm overflows will be addressed through these plans.

Outside of the Bill, Ministers have made their expectations crystal clear in DEFRA’s draft Strategic Policy Statement to Ofwat. For the first time, the Government will be telling the industry’s regulator that it expects water companies to take steps to “significantly reduce storm overflows”, and that it expects funding to be approved for them to do so.

Ministers will also undertake a review of legislation which would require Sustainable Drainage Systems to be constructed to ministerial standards on new developments, reducing the pressure on the sewage system.

Never the less – some activists have been wrongly claiming this was a vote to allow the dumping of sewage in rivers and the sea. It wasn’t – it was a vote to make sure whatever is done to tackle the current situation is fully planed and costed.

Later in the week I had a chance to meet with the UK’s lead EU negotiator, Lord Frost. The situation in France is becoming ridiculous in my opinion as France behaves petulantly – going as far as to draft a letter to the EU Commission making their case the UK should be ‘punished’ for leaving the bloc.

I think most people can see that a lot of this posturing is designed to boost President Macron’s sluggish poll ratings ahead of the upcoming elections in France – it’s simply not good enough that people’s livelihoods are jeopardised like this. If France wants to stop some boats, it could start with the ones making illegal crossings over the Channel.

Ahead of the Budget I also took part in an interview with BBC Radio Manchester, covering everything from levelling up to the “Places for Everyone” consultation – I also discussed plans to bring the Metro to Middleton which will be greatly sped up as the Government has given £1billion to Greater Manchester to improve public transport. As always, I’ll continue to work cross-party with the Mayor to make this a reality – it’s what people voted for.

This update will seem a little shorter this week. Unfortunately, I was pinged by Track and Trace and following both a Lateral Flow and a PCR, I tested positive for COVID-19.

Luckily, because I’m double-jabbed the symptoms are more like a bad cold than anything, but it does mean I’m in self-isolation for the next few days. My office is still open and I’m working from my sofa so please do get in touch if I can help.

been a long week following the return from November .