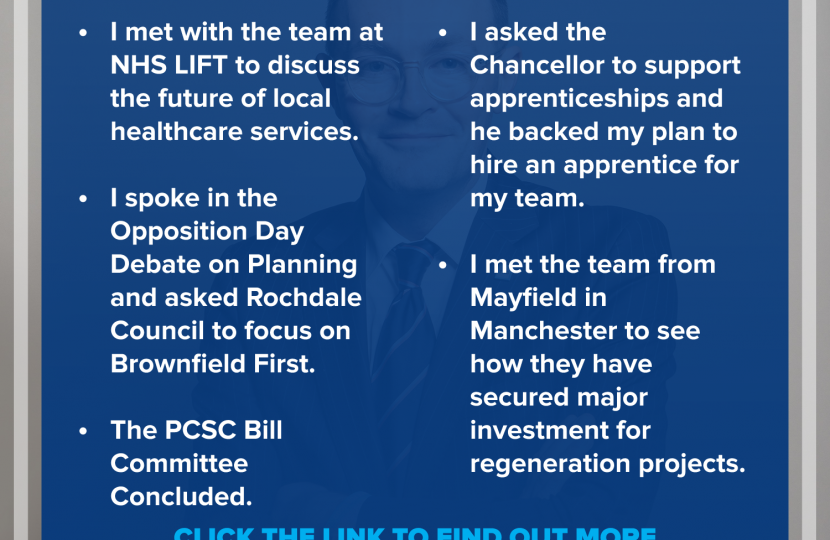 A productive time in parliament this week.

I met the team from NHS LIFT on Monday to talk about the future of healthcare services in the community – a lot of people have contacted me concerned about the accessibility of GPs during the pandemic and I and others made clear that we’d like to see normal surgery service resume soon.

Later in the day I spoke in the planning debate brought by the opposition and challenged Rochdale Borough Council to take a Brownfield-First approach to development.

On Tuesday and Thursday I was at the last two sessions of the PCSC Bill Committee – from here the Bill will go back to the house for further scrutiny before going on to the House of Lords. I’m really pleased to see that provisions like tougher sentences for sex offenders and penalties for illegal encampments have remained, along with new laws to curb violent protest.

I also told the Chancellor about my plan to hire an apprentice and he backed the idea.

On Wednesday I caught up with correspondence and took part in internal meetings.

On Thursday evening I headed back North for meetings over the weekend including a meeting on Friday with the team behind Mayfield in Manchester to talk about how they managed to get major investment into a regeneration project and how we might go about doing the same.

On Saturday I met with local Councillors in Bamford and community groups to see the work that they’ve been doing to support the local environment throughout lockdown and thank them for all their hard work.

Covid rates locally remain high but there’s light at the end of the tunnel in the form of a clear break between case rates and admissions – when you get the call, get your jab and hopefully we’ll all soon be able to move on!