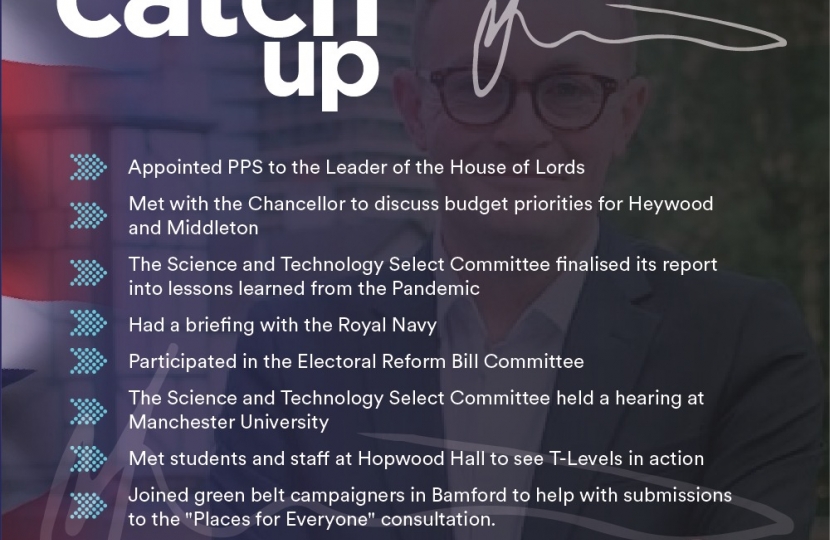 This week was the last before Conference season and so was especially busy.

With last week’s reshuffle still working its way through the ranks the early part of the week was a bit uncertain, picking up the last bits and pieces from my old job as PPS to the Lord Chancellor. With a new Secretary of State incoming and bringing his own PPS from the Foreign Office, I was asked to move to a new post as the PPS to the Leader of the House of Lords. I’m looking forward to the new challenge and a change of pace as I see how the other half of Parliament does things!

On Tuesday I popped into no.11 Downing Street for breakfast with the Chancellor – I wanted to put down some markers for things which I think will help our communities and I’m pleased to say the Chancellor was very much in listening mode.

Later on I met with colleagues from the Science & Technology Select Committee and the Health Select Committee to put the finishing touches to the report we’re compiling on ‘Lessons Learned’ from the Pandemic – the report is intended to be a dispassionate assessment of what did work and what didn’t during the early days of the crisis and will hopefully guide future responses to national emergencies.

On Wednesday evening I joined fellow members of the Armed Forces Parliamentary Scheme for a briefing with a senior member of the Admiralty – I’m looking forward to getting properly stuck into the scheme this year now that many of the Coronavirus restrictions have been lifted and we can fully engage again.

As with last week (and the next few), a lot of the week was spent on the Electoral Reform Bill Committee – as always the debate was robust and lively – one for the geeks, but I never pretended to be anything else!

On Thursday there was a bit of a change of pace as the Science & Technology Select Committee held its first meeting outside of Westminster this Parliament. I joined colleagues at the University of Manchester where we interviewed witnesses on the future of research and development with a particular emphasis on how we’re leading the way in Greater Manchester – it was a fascinating dive into some really impressive work.

Since I was already home, I stayed up in Manchester and on Friday decided to celebrate the launch of T-Levels by meeting some of the students taking the new qualifications at Hopwood Hall College. I wanted to understand how they were working and what both students and staff thought of the programme. From what I can tell, they’ll be a huge success.

Lastly on Saturday, I joined green belt campaigners on Bamford Green to encourage people to make a submission to the “Places for Everyone” consultation – it was wonderful to be joined by campaigners from around the constituency and the level of support was really remarkable.

This coming week I’ll be out and about in the constituency ahead of a long weekend off for Conservative Party Conference which is in Manchester this year. As always, the team and I are here to help so don’t be shy if there’s anything we can do to help.

In the meantime, stay safe and look after each other.