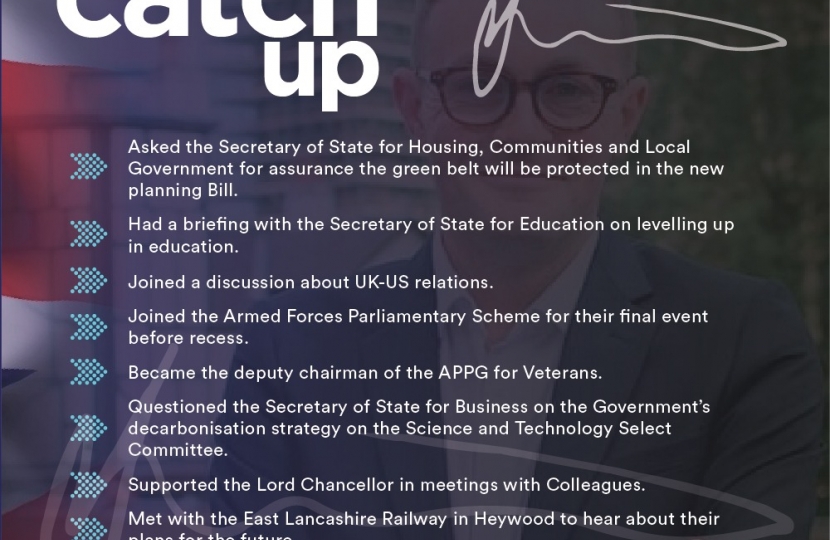 Parliament wound down this week as we head into Summer recess.

I started the week by asking the Secretary of State for Housing to give me and people across Heywood, Middleton, Bamford, Castleton and Norden an assurance that the new Planning Bill would include protections for our local Green Belt – I’ve posted his response on my Facebook page, but suffice to say, it was what we were all hoping to hear.

Later on I joined colleagues in a meeting with the Education Secretary about levelling up in education – it’s so important that we make sure the next generation have the skills they need to take advantage of new jobs and industries, especially after the extra challenge of COVID-19.

Mid week I joined a discussion about the future of UK-US relations – post-Brexit our relationship with the USA is more important than ever and I wanted to hear from experts on both sides of the pond what they thing will be the key areas of interest for both countries.

I was also extremely grateful to be voted in as the deputy chair of the APPG for Veterans this week. The armed forces mean a great deal to me, as I know they do to a lot of us locally. The APPG will ensure that the voices of service personnel are heard as decisions are made about how best to repay their service.

This week also saw the last sittings of the Science and Technology Select Committee until September as we concluded our inquiry into the future of Hydrogen as a fuel source. I had the chance to question the Business Secretary about the Government’s plans and preparedness for ‘net-zero’.

Now that COVID restrictions have lifted I was also able to meet up with colleagues in person for a number receptions and gatherings – the highlight for me was the last meeting of the Armed Forces Parliamentary Scheme for this year. I’ve really enjoyed learning more about the forces and I’m looking forward to getting stuck in properly next year now that we aren’t restricted by the pandemic.

Finally this week, I had the wonderful experience of meeting the team from the East Lancashire railway – getting a heritage train from the station in Heywood into Bury for a tour of their engine sheds followed by a conversation with about their ambitious plans to develop the station at Heywood and to develop a further station in Castleton – I’m extremely proud of the work they’ve done to preserve our local heritage and very pleased to see they’re focused on adding a great deal of value to our communities.

Now that Parliament isn’t sitting for the next few weeks, I’m looking forward to getting out and about in the Constituency and meeting more of you as well as having a few days for myself.

Enjoy the sunny weather, stay safe and as always, I’m an email or phone call away.