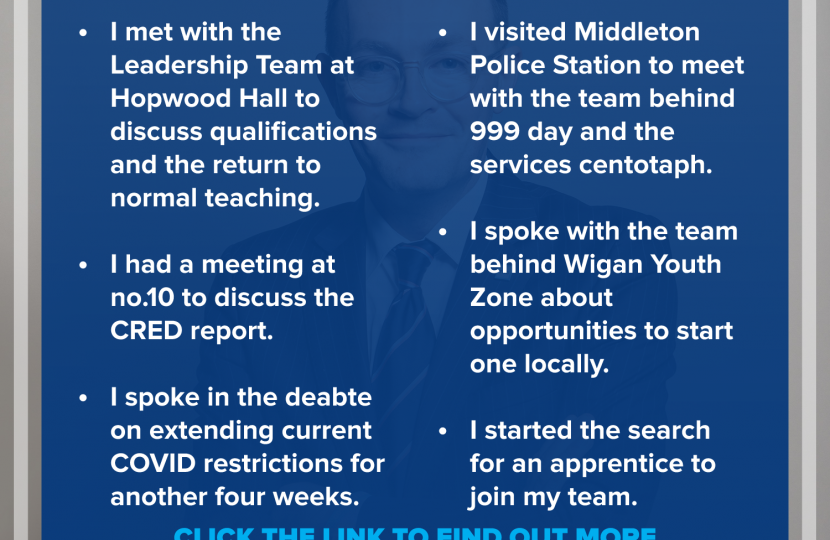 Another lively week in Westminster and the constituency started on Monday with my regular catch-up with the leadership team from Hopwood Hall where they brought me up to date with their frankly heroic work to make sure that their students are still getting a first class education throughout the pandemic.

Later in the day I popped into no.10 Downing Street to speak with the PM’s team about the CRED report and how we go about ensuring that people feel a stronger sense of ownership in their community.

As with the past few weeks, I spent Tuesday on the Bill Committee for the PCSC Bill – this week saw some fascinating and lively debates and it’s really interesting to see how all parties work together to refine legislation before it goes back to Parliament for further debate.

On Wednesday Parliament debated the four week delay to reopening after COVID restrictions. I spoke in the debate and made an appeal to Members to work collaboratively rather than trying to score political points or push ideological views – the only way out of this is to work together to make sure as many people of all ages are vaccinated as quickly as possible. We can’t live with restrictions forever.

On Thursday I spent the day on the Bill Committee before heading back up North.

This weekend I met with Tom Scholes-Fogg who leads the 999 Day celebrations each year and is based out of Middleton police station. We discussed how we make sure that 999 Day is marked in the same way as Armed Forces Day and he also showed me plans for a new cenotaph to mark the work of Police, Fire, NHS and other blue light services. The design is stunning and a fitting tribute to all the men and women who keep us safe and healthy.

Later on I met with the team behind Wigan Youth Zone. I really think Heywood and Middleton would benefit from a Youth Zone of their own so I wanted to hear from the people who had successfully set one up to hear about how they went about doing things. It was a really positive and productive conversation.

Also this we I launched the search for an apprentice to join my team. The apprenticeship will give the right person a good wage and a level 3 qualification at the end of the course – if you are interested in politics and think this might be the right opportunity for you, or you know someone who would suit it you can find out more about the role here.

As always, look after yourselves and each other – COVID rates are high locally, but moving in the right direction with every jab.