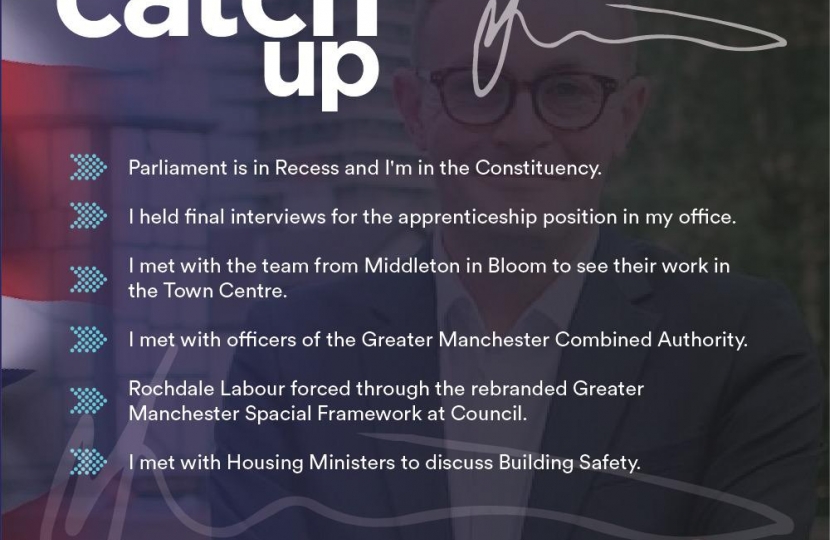 All change this week as Parliament is in recess for summer.

As such, I’ve been back in the Constituency and it’s been wonderful to get out and about and talk to people.

This week I’ve taken the opportunity to get caught up on some outstanding constituency matters before taking some time off for myself after a very busy 18 months!

One of these jobs was the final stages of interviews for the apprenticeship in my Heywood office – we were lucky to get some really strong applications and it has been a tough choice to make, but I’ve made an offer to an outstanding candidate and once every ‘i’ is dotted and ‘t’ crossed, I’ll look forward to them joining my team.

Later in the week I met up with the team from Middleton in Bloom to see the work they’ve done in the town centre and hear about their plans for the area – they’ve done an amazing job and I think we can all agree that the town look fantastic.

On Thursday I had a meeting with the Combined Authority to cover a range of issues, but mostly to talk about how they can use the money the Government gives them more effectively in our constituency – there are a lot of ambitious projects that I want them to consider and it never hurts to be bold and ask!

The big disappointment of the week came in the form of Rochdale Borough Council’s meeting which had been moved up from its normal time to ensure spotty attendance. The Labour group forced through Andy Burnham’s rebranded GMSF despite vocal opposition from local people. Cynically, they allowed councillors in two marginal wards to cast a token vote against the plan in the full knowledge that it would pass anyway.

I had been due to go into the Town Hall on Friday for a meeting with the Leader to discuss this and have our (very long overdue) meeting about the Levelling Up Fund, but I found out from a third party that he had unilaterally cancelled the meeting without the courtesy of telling me. Presumably he was just expecting me to turn up and find out on the day. Pretty shoddy behaviour from a pretty shoddy Council.

As well as in person meetings the usual round of zoom calls has continued and as well as updates on COVID and business recovery, I had a meeting about the Building Safety Bill with Housing Ministers which led to a lively exchange of views from all parties.

Infection rates locally are dropping, which is wonderful news, but of course we’re not out of the woods yet, so please continue to be careful and look after one another.

This will be the last ‘catch-up’ for a couple of weeks as I’m going to take a few days away from the laptop – my office will still be open and we’ll be contactable as normal.