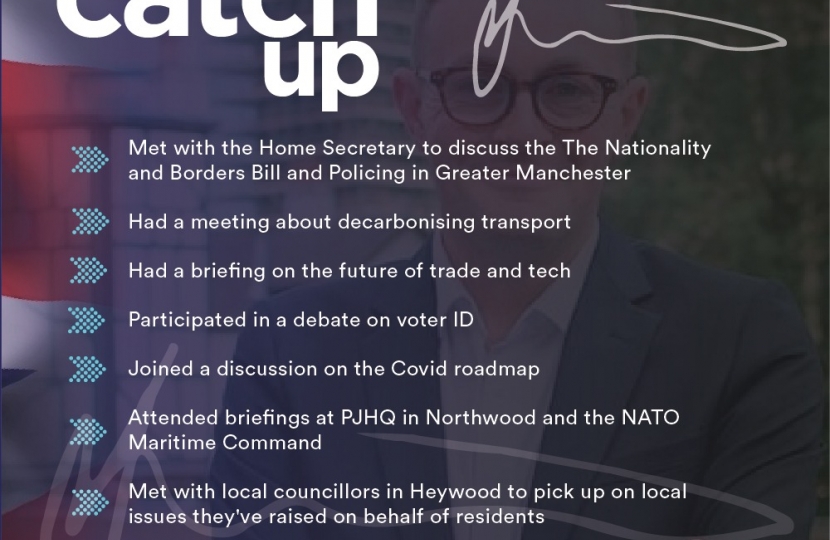 As we head towards Summer recess, Parliament has been dealing with some of the bigger pieces of legislation in the Queen’s Speech including the Health and Social Care Bill.

Also this week my team and I were joined by our first work experience student which was a good opportunity for us all to reflect on what we’ve learned over the past year and a half.

Early in the week I met with the Home Secretary to discuss the new Nationality and Borders Bill and policing in Greater Manchester – I’m hoping to meet with the new Chief Constable over Summer along with my parliamentary colleagues. He has a big job to undo the damage done by years of mismanagement and neglect by the Mayor and the previous Chief Constable and I’m keen to make sure he has every opportunity to succeed.

Later on I had a meeting with the Transport Minister to discuss the decarbonisation of transport – the Science and Technology Committee have been conducting an inquiry into the future of hydrogen as part of our net-zero target, so I was keen to hear if and how this would play into the Government’s wider strategy.

On Tuesday I spoke in a Westminster Hall debate on the Government’s proposals to introduce ID checks at the polls. I support this proposal as a simple way to combat electoral fraud. The checks have been in place in Northern Ireland since the 1980s with no disruption and have been very successful in making sure that only those who should be voting do so.

In the middle of the week I was very pleased to pop over the bridge from Parliament to St Thomas’ Hospital for my 2nd jab. The experience couldn’t have been better or more efficient – please do get your jabs when you get the call. From Monday most restrictions will be lifted and it’s so important we’re all as safe as possible.

At the end of the week, I joined the Armed Forces Parliamentary Scheme at PJHQ in Northwood for a series of briefings and later in the day visited NATO Maritime Command.

This weekend I was in Heywood meeting with local Councillors Jacqui Beswick and Alan McCarthy – Jacqui and Alan have raised a number of local issues with me which the Council has ignored so I was pleased to get stuck into some of these with the team.

I also had a final round of meetings online about the lifting of coronavirus restrictions – I’m cautiously optimistic about this. Whilst case rates are still on the high side, the link between infections and hospitalisations appears to be broken.

Obviously we will have to keep an eye on things over the coming days, but it’s so important that we try to get things back to normal. As always, stay safe, use common sense and look after each other.