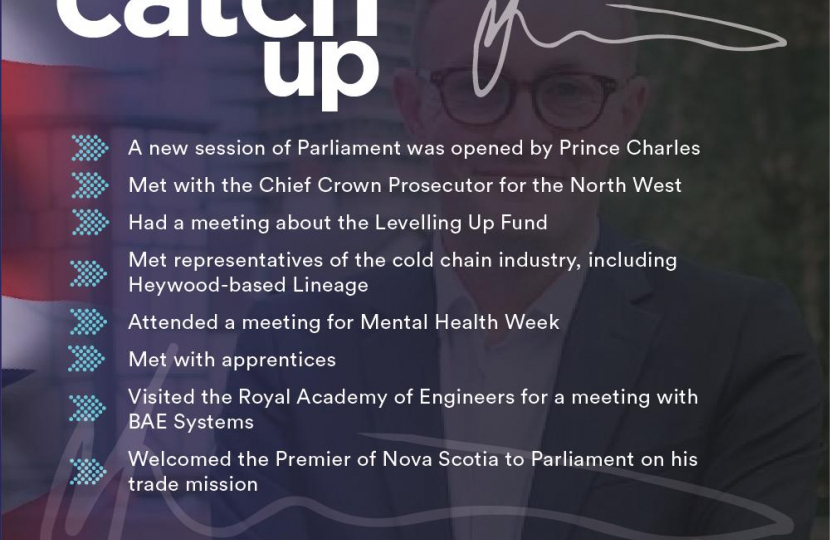 Parliament reopened for a new session on Tuesday - this is always very special occasion with all the pomp and ceremony you'd expect. Sadly, the Queen wasn't able to attend because of her health, but it was wonderful to see Prince Charles step up to represent the Crown as 38 new Bills were announced for the new session.

In my role as PPS to the Leader of the House of Lords, I was able to play a small part in the Opening which was a huge privilege.

Despite the Opening, this was also a normal working week and on Monday I had a meeting with the head of the CPS for the North West to discuss a range of issues, including court backlogs and improving the Probation Service. Later in the day I met with Council officers to get an update on their progress on the Levelling Up bid for Heywood and Middleton. It's been a difficult process getting to this point because of the bad behaviour of a couple of Labour Councillors who have put politics before people but I'm extremely grateful to the Officers who have worked constructively to mitigate this and keep the bid on track.

On Tuesday after the Opening ceremony I met with representatives of the Cold Chain industry including Lineage who are based in Heywood to talk about how they can help in our economic recovery and play their part in tackling the cost of living.

On Wednesday there was no Prime Minister's Questions so I was able to use the free time for meetings with ADS about apprenticeships and with interested parties about Metal Health Week.

On Thursday I met with BEA Systems and the team from Tempest, the programme delivering the next generation of UK fighter planes - our local economy directly benefits from this project so I was keen to learn more.

Unusually for a Friday I was in Westminster again as I had the great privilege of welcoming the Premier of Nova Scotia to Parliament as part of his trade mission. Post Brexit our regional economies will benefit for closer ties with countries like Canada and I was keen to help build that relationship.

Another busy week lies ahead, but it's great to be back to work, delivering on your priorities.

A slightly different week for this update.