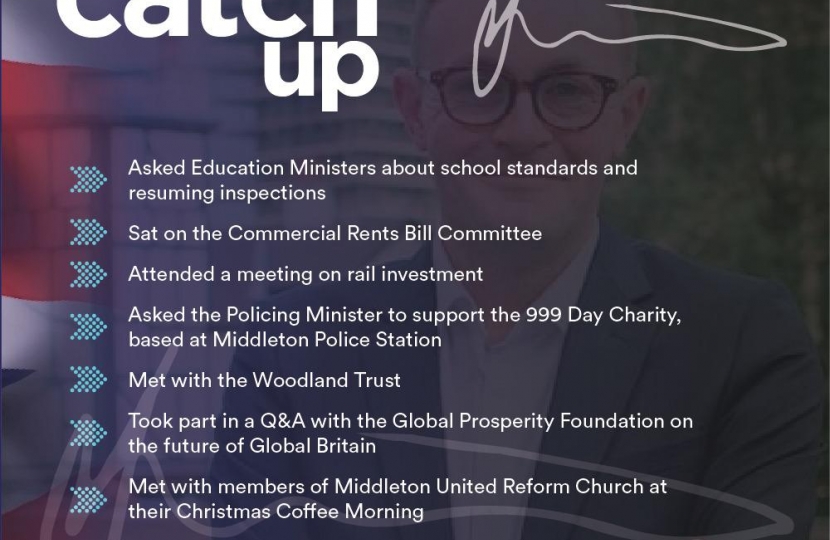 Two years ago today I was pounding the streets of Heywood and Middleton in the diving rain asking for your support to be the constituency's next MP.
You did me the very great honour of trusting me with that role and I hope that you think I've taken it, and you, seriously.

No one had the pandemic in their manifesto and it has undoubtedly changed the way things could have gone in the area, but my promise to you is that for however long you choose to keep me in post, I will be working to deliver on the promises I made to you two years ago.

That's why I feel I should start this week's catch up with a sincere apology.

This past few weeks we haven't covered ourselves in glory. Far from it. Some of the behaviour we've seen from politicians and senior civil servants has been disgraceful. It's right that these matters are being investigated and I've made it clear to the people who need to hear it that people deserve answers and proper apology from anyone who broke the rules they were asking others to follow.

Despite all this, I've been getting on with my job of representing you in Parliament and campaigning for our communities.

On Monday I asked the Schools Minister about standards and inspections in the House - I've had a large number of emails from parents concerned about the quality of the education their children are getting, especially following school closures for the pandemic - I was pleased to receive an assurance that Ofsted will be ramping up inspections in the new year.
Later on I joined the Bill Committee for the Commercial Rents Bill. Although not a large piece of legislation, the Bill will create a mechanism for traders to resolve rent arrears from the pandemic in conjunction with their landlord, making sure both parties are fairly treated. As we try to get the economy back to normal, it's only right that we tackle the negative effects of the lockdown last year.

Mid week I met with the Policing Minister to ask him for the Home Office's formal support for 999 Day. Like Armed Forces Day, 999 Day is a way for us to show our thanks to our emergency responders. The Charity behind 999 Day is based at Middleton Police Station and I met with the head of the Charity earlier this year to see the work they're doing. I'm pleased to say the Minister was very supportive and is looking into how the day is formally recognised by the Government next year.

Later on in the week I went to a briefing with the Woodland Trust about sustainable development which a number of you had asked me to attend - I learned a great deal so thank you to those who asked me to go. If you're aware of events in Parliament and would like me to go along to learn more, let me know.

I also met with the High Speed Rail Group - there's been a lot of misinformation whizzing about following the recent Rail Review when in truth, our area is a net beneficiary. I was really keen to see how the revised plans would work and how we locally can feel the benefits.

This week I also took part in a virtual Q&A with the Global Prosperity Foundation, an organisation which focuses on International Aid and how best to deliver it. It was a wide ranging talk covering everything from elections to disaster relief and I really enjoyed the deep dive into an important area.

We can do better and I promise you I'll always try to do my best for you.

Stay safe and see you next week.

They say a week is a long time in politics. This one has been very long indeed!

The news was understandably dominated by the defection of Bury South MP Christian Wakeford to the Labour Party.